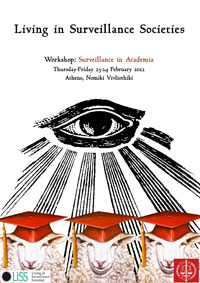 Τhe workshop "Surveillance in Academia" in Athens was selected after a review process among a series of proposals for funded workshops by the European LiSS Management Committee.
Μany thanks to the painter George Pennas, who graciously granted license to reuse part of his painting here, whose dimensions are 1.20m X 2.00m